Cogeneration, also called combined heat and power (CHP), is the generation of electricity plus the recovery of heat that would otherwise be discharged to the environment.

Cogeneration, also called combined heat and power (CHP), is the generation of electricity plus the recovery of heat that would otherwise be discharged to the environment. This heat is used for space heating in buildings, drying, producing hot water or steam and in various industrial processes. Commonly, electricity is generated in a central power plant, while on-site heating and cooling equipment is used to meet non-electric energy requirements. Today, cogeneration systems can achieve efficiencies over 80%, whilst separate systems have combined efficiencies of only 45%.

Cogeneration plants also collect thermal energy from an intercooler, the jacket water, lubrication oil and exhaust gas via heat exchangers to produce hot water. This allows the total energy utilization efficiency of cogeneration plants to reach 90%. Some cogeneration plants are connected to an absorption chiller system where the engine's waste heat is used to drive the generator of the absorption system. Such a system will convert the combustion heat of the fuel into electricity and high-quality cooling.

SWEP BPHEs are suitable for cogeneration systems with rated power capacities up to 15 MW.

2. The Concept and Use of Cogeneration

The concept of cogeneration means the combined production of electricity and heat. Unlike the classic power plant, where heat produced in the creation of electricity escapes into the environment, a cogeneration unit uses the heat produced for heating and thus saves fuel. Electricity in all power stations originates in the spinning of electrical generators driven by turbines. The heat necessary for the production of steam, which drives the turbine, comes mainly from the burning of hydrocarbon fuels or the fission of atomic nuclei. However, most of the heat is not used, and is released into the atmosphere. A nuclear power plant therefore operates at only 25-35% efficiency, for example. The efficiency of production in power stations is about 30%, while in the most modern steam-gas power plants it is 60%. There are of course further losses of around 10% during the transformation and transmission of electricity over a distance. Figure 6.1 shows the loss ratios for a power station. 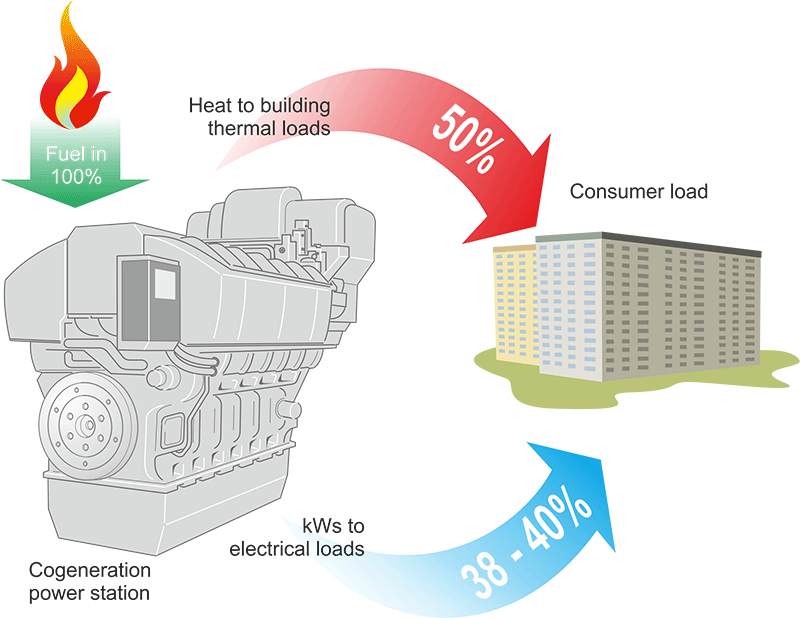 Advanced technology has now made cogeneration systems suitable for a much wider range of applications than in the past. It is possible to use cogeneration units in all buildings with a demand for electricity and heat, typically:

A cogeneration system normally consists of a drive motor turning a generator to produce electricity, and a waste heat recovery system to capture heat from the exhaust and cooling water jacket. The system power comes from a diesel engine, a lean-burn natural gas reciprocating engine, a gas turbine, a micro-turbine or a fuel cell.

Backpressure steam can be used directly as process steam in industrial applications such as paper machines, or it can be condensed in heat exchangers that transfer the heat to a heating medium such as district heating water.

In gas turbine heat recovery boiler power plants, heat is generated with hot flue gases from the turbine. The fuel is usually natural gas, oil, or a combination of these. Gas turbines can even be fired with gasified solid or liquid fuels. Heat can be extracted from the heat recovery boiler either for district heating or as process steam.

Instead of a gas turbine, a reciprocating engine such as a diesel engine can be combined with a heat recovery boiler, which in some applications supplies steam to a steam turbine to generate both electricity and heat. The heat can be recovered from lubrication oil and engine cooling water as well as from exhaust gases. Both the lubrication oil and the cooling water can be cooled with BPHEs.

The more decentralized energy production becomes, the lower the transport losses, in terms of total (heat and electricity) energy efficiency. Figure 6.4 gives an overview of transmission losses in systems of different sizes. 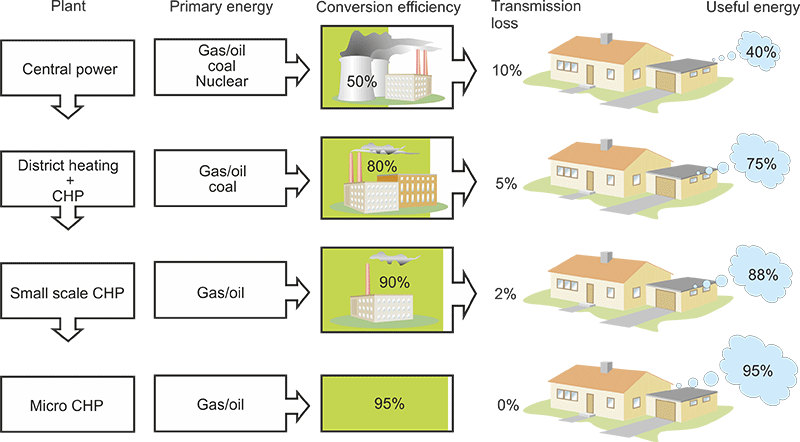 Small-scale cogeneration systems are generally used for applications rated less than 1 MWe (electrical output) in buildings such as multi-residential dwellings, hotels and hospitals. They can be based on engines or, more recently, on micro-turbines. Transmission losses in these systems can be reduced by decentralization, and therefore shorter transmission distances to the end consumer. The smallest systems of this type are usually rated more than 20 kWe and are therefore still not suitable for the smallest applications, such as providing a single house with heat and power.

Systems corresponding to the consumption of only a few households, or one-family homes, typically with an electrical output around 1 kW, are called micro-cogeneration systems. Figure 6.5 shows a flow chart for a micro-cogeneration system. In this system a gas engine unit is connected to a generator with an electrical output of 1 kW. This electricity output is connected to electrical appliances, whilst unused electricity is fed to the grid. The engine is cooled by a water/ethylene glycol circuit in a BPHE (A), and this heat together with the exhaust gas heat (engine plus gas heat = 3kW) is used to heat tap water. The supplementary boiler supplies a water storage tank. BPHE (B) is included in a circuit with the supplementary boiler and storage tank, and heats water for the central heating circuit. Figure 6.6 shows the mounted BPHEs. 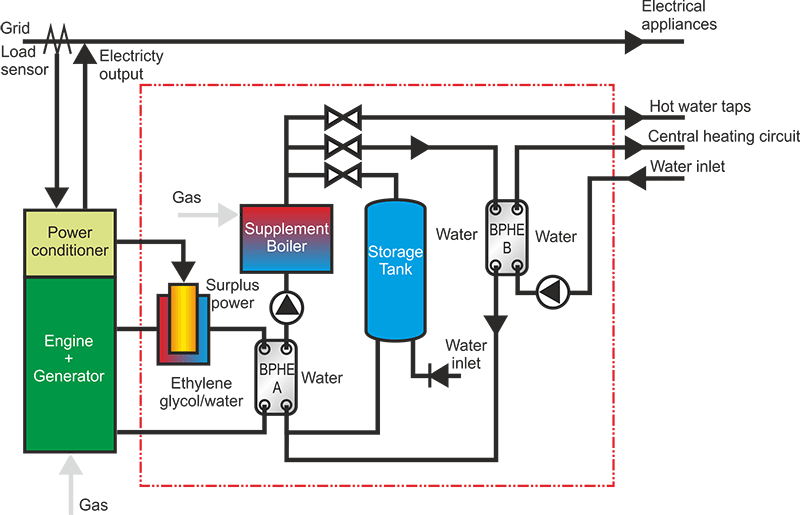 Figure 6.5 Principal layout of a micro-cogeneration system. The system can be located in kitchens or basements, for example, with the same noise level and space requirements as a modern heating boiler. 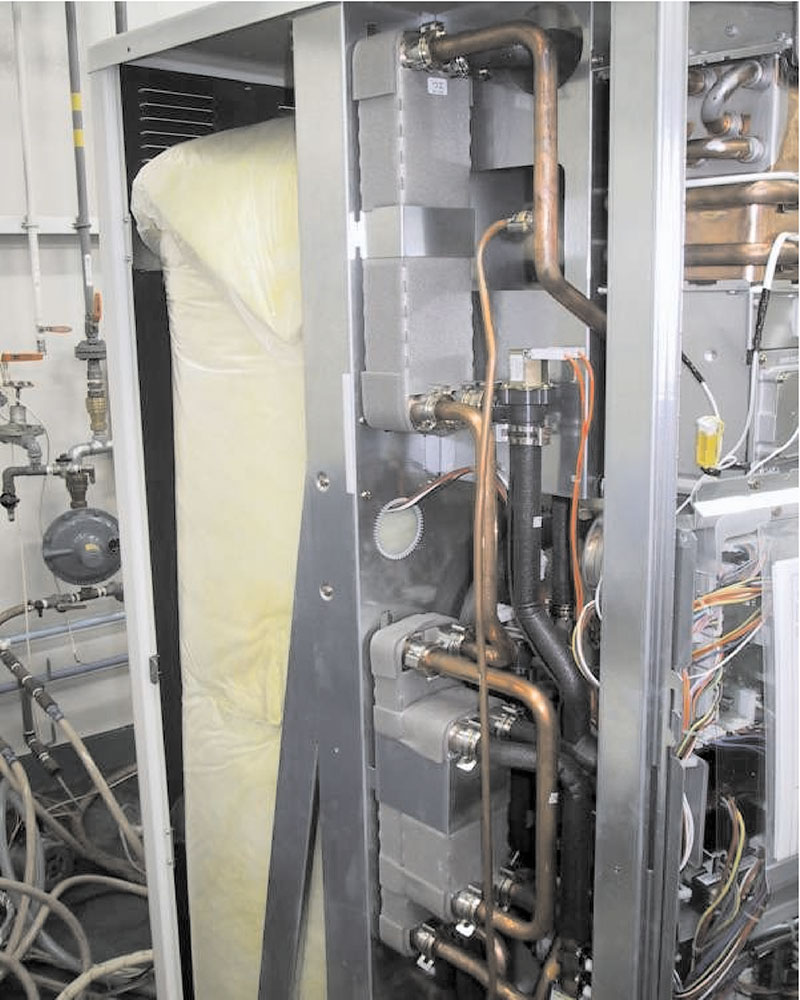 Figure 6.7 shows a flow chart for a polymer electrolyte fuel cell (PEFC) system. A PEFC system can be compared with micro-cogeneration systems, but with the advantages of higher electrical efficiency, greater compactness and silent operation. The system, designed for one-family houses, consists of an outdoor unit housing a reformer and fuel cell stack, and an indoor unit with hot water accumulation. The electricity is made in the fuel cell where hydrogen and oxygen react to produce electricity and (heated) water.

The fuel cell system usually uses a number of different heat exchangers, of which two may be BPHEs (as shown in Figure 6.7). Inside the fuel cell a pure water circuit removes excess heat from the process. All stainless-brazed BPHEs are needed to avoid the presence of copper ions, which would otherwise destroy the PEFC. Furthermore, the treated water, usually pure (deionized) water, could dissolve copper from a copper-brazed BPHE.

The heat transfer process based on BPHE (A) is to cool the hydrogen-rich gas before it enters the fuel cell stack. Temperature control is also important here in order to feed the stack with gas at the right temperature. BPHE (B) rejects heat to the hot water tank.

This cogeneration system uses a combustion engine driven by natural gas.
Heat is rejected from exhaust gases to water, as well as from engine oil and the jacket water that encloses the combustion engine. Figure 6.8 shows the principal layout with BPHE (A) cooling an engine oil circuit with water, and BPHE (B) cooling an ethylene glycol/water circuit (jacket water) with water. The heated water from the secondary sides of the BPHEs is then led into a radiator water circuit, which is used to heat a plant, a farm, a few houses, etc. Thanks to the BPHE, the heat can be transferred from the ethylene glycol to the heating water very efficiently. The electrical output of these systems is typically around a couple of hundred kilowatts. The BPHE shown in picture 6.5 is the one cooling the jacket water in this process. 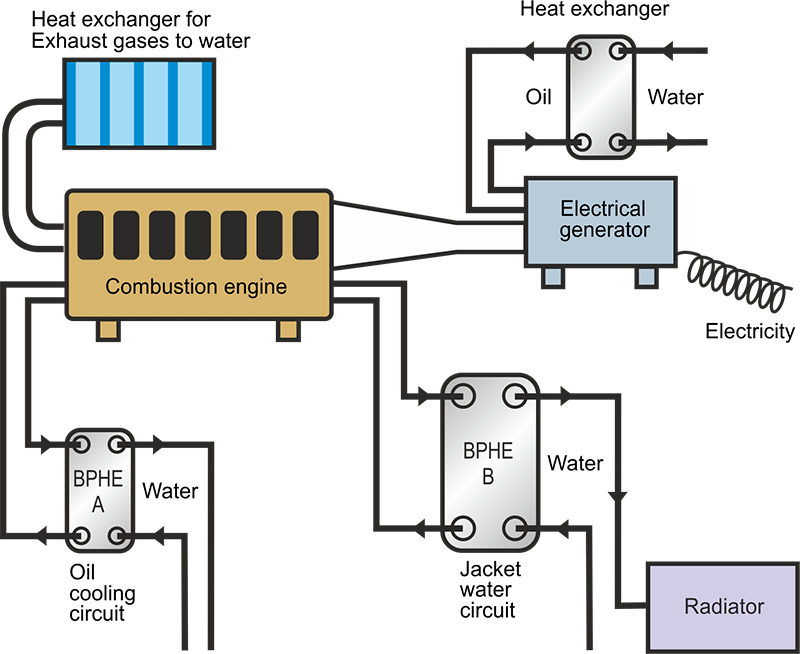 Fig. 6.8 An engine cogeneration system. The engine oil is often cooled with the jacket water circuit inside the motor, which requires only one BPHE, unlike this design shown. 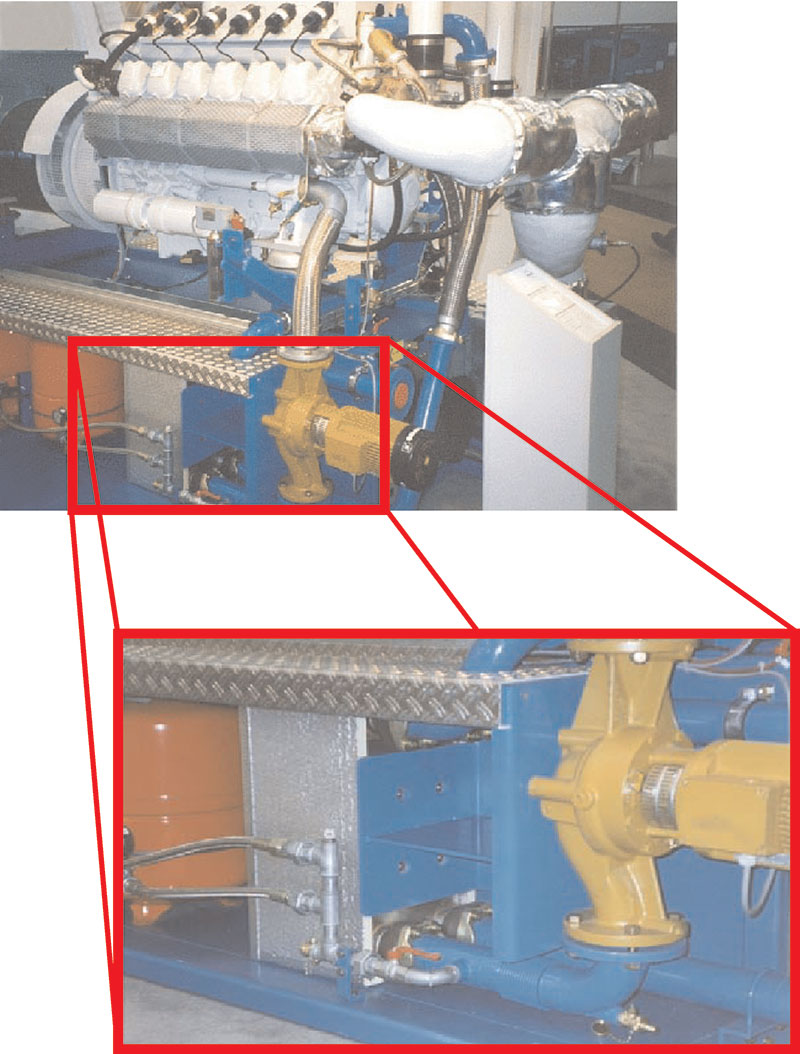